1 mg Finasteride 1 mg (PROPECIA) has been approved in the USA and in the majority of European countries for the treatment of androgenic alopecia in its early stages in men.

appearance of adverse affects that alter the sexual function, an observation that has been noted in 2% of the patients

participating in different studies performed on the drug’s effectiveness. The sexual side effects include a decrease in libido, erectile dysfunction and a reduction in the volume ejaculated.

Our practical experience, however, in a clinic specializing in hair transplants, shows that the adverse effects of a sexual nature occur in less than 0.5% of the patients that take finasteride 1 mg.

The objective of this study is to evaluate the sexual function of patients taking 1 mg finasteride compared to the control patients (without medication and of similar age) using the International Index of Erectile Function (IIEF). The IIEF is a valid means of evaluating the masculine erectile function cross-culturally as well as psychologically, which has been used to evaluate the effectiveness of sindenafil (VIAGRA) and phentolamine as oral treatments for erectile dysfunction. The IIEF is a brief questionnaire consisting of 15 questions, is reliable, performed by the patient himself, and is available in 10 languages (table 1). Five main areas are evaluated: erectile function, orgasmic function, sexual desire, satisfaction from the act of sex and satisfaction sexual in general.  The sum of the points gained in each area produce a result which when added corresponds to the final score of the IIEF, the highest score being related to a better sexual function (table 2).  The subject area is considered a worthy diagnostic tool to distinguish between patients with and without sexual dysfunction. A score of erectile function less than 25 indicates erectile dysfunction.

Our study includes 236 patients, between 18 and 47 years of age, who were monitored as patients with androgenic alopecia taking 1 mg finasteride. All of the patients were informed of the study, they willingly accepted to participate and they themselves answered the questions. At the time of completing the questionnaire, the average time that the patients were taking finasteride was 8 months (between 6 and 13 months). The control patients include 236 men of similar age who were attended in our hospitals for disorders of the nails. None of the control patients were taking any kind of medicine which could produce or interfere with their sexual function in any way. A statistical analysis model was used to compare the scores obtained in the questionnaires of the IIEFF in both groups of patients. 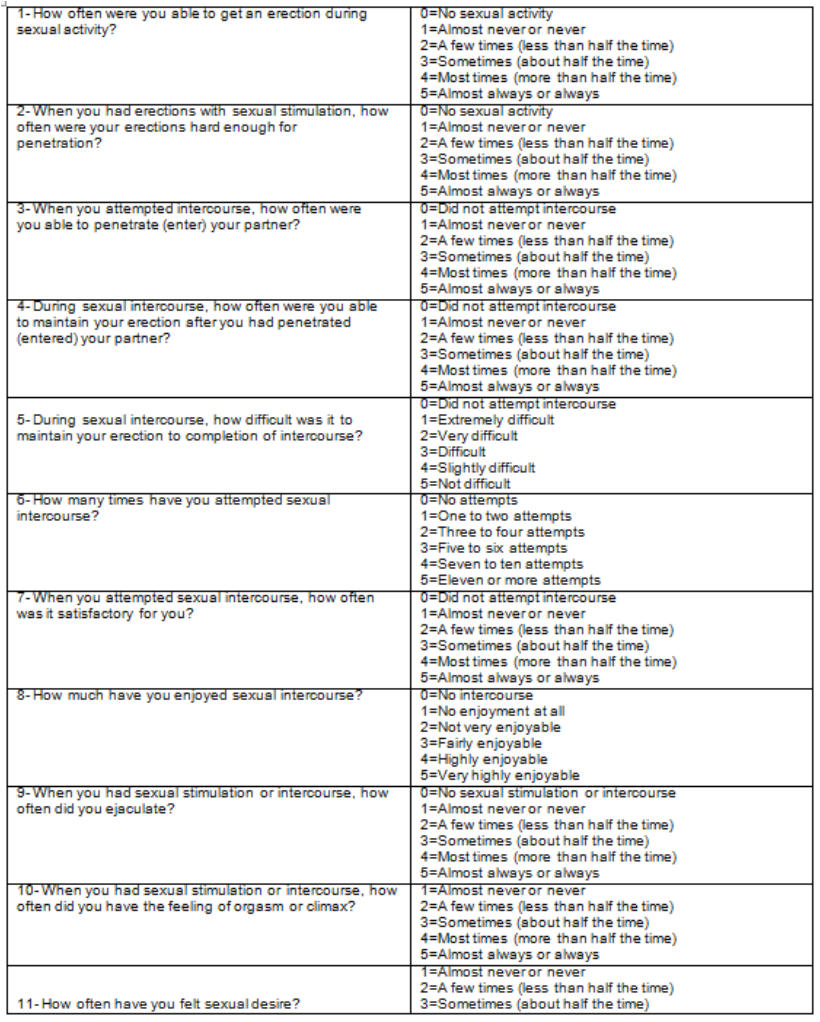 The comparison between the scores obtained in the group taking finasteride and the control group did not demonstrate any statistically significant differences with respect to the general IIEF result or when taking each subject area separately (fig 1). This indicates that the sexual function as well as the erectile function of the subjects taking finasteride is not reduced with respect to the control group (patients without medication).

Figure 1. Graph which compares the erectile function (EF) and the global results of the IIEF questionnaire in patients treated with 1 mg finasteride and the control patients. 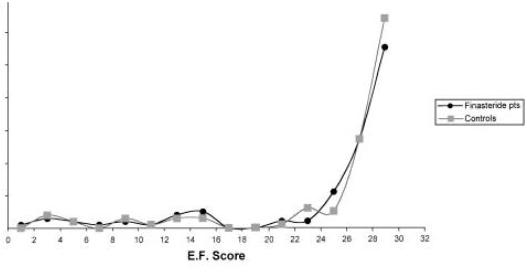 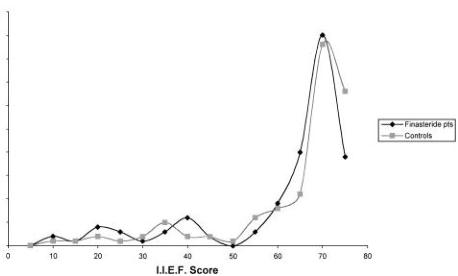 Finasteride is an inhibitor of Type II 5-alfa-reductase, inhibiting the conversion of testosterone into dihydrotestosterone (DHT). The drug is effective in the treatment of androgenic alopecia, where follicular miniaturization occurs as a consequence of the action of the androgens (especially and mainly DHT) on the follicular units.

The administration of 1 mg finasteride (PROPECIA) significantly reduces the levels of DHT in plasma, prostate and scalp and produces a slight increase in the levels of testosterone that, however, stays within physiological limits. As it is the testosterone and not the DHT that is responsible for sexual function after puberty, then

in theory by administering Finasteride a response that leads to sexual dysfunction is not expected.

Nonetheless, the adverse effects of a sexual nature were obtained in around 2% of various clinical studies that evaluated patients taking 1 mg finasteride for androgenic alopecia. The act of informing patients about the possible interference of the drug with the sexual function can bias those results to a certain extent. The doctors who prescribe this drug rarely observe side effects of a sexual nature.

Our study was completed evaluating the sexual function of individuals taking 1 mg finasteride using an objective method, the IIEF questionnaire. In spite of the fact that the patients taking finasteride were informed of the possible adverse side effects, the results indicate that the sexual function as well as the erectile function of these patients was not reduced with respect to the control group. These results are in accordance with the experience of many dermatologists who do not observe erectile or sexual dysfunction in patients who take finasteride 1 mg.

We believe that the IIEF questionnaire should be performed routinely on patients who begin treatment with 1 mg finasteride, with the goal of being able to include a quantitative method to evaluate the sexual function during treatment. Our experience was that the questionnaire was very well accepted by the patients, who were often quite anxious about the possible side effects of a sexual nature and who were eager to have close and careful monitoring during their treatment