It’s no wonder that hair transplant surgeons have paused in their routine prescribing habits. Class action lawsuits founded on anecdotal reports confirm that 5-ARI´s now join the rest of the drugs on the planet as the subject of questionable lawsuits.
Recently, a silver lining has emerged with the advent of two studies on finasteride detailed in the following articles:▪Evaluation of efficacy and safety of finasteride 1mg in 3,177 Japanese men with androgenetic alopecia (Sato, A., and A.Takeda. Journal of Dermatol. 2011; 38:1-6)▪Finasteride, 1mg daily administration on male androgenetic alopecia and different age groups: 10-year follow-up (A.Rossi, et al. Dermatol Ther. 2011; 24(4):455-461)Both articles were published in the fall of 2011. These authors are to be congratulated on their original research and important contribution to the literature. A brief overview of each article follows.

The Sato study is significant in that it involved over 3,000 men.

in the period from January 2006 to June 2009. All men took the same dose of finasteride, 1mg per day. Of the 3,177 patients statistical parameters were obtained in 2,561 men by modified global photographic assessment; the photographs were assessed using the previously validated 7 point rating scale. Safety data was assessed by interviews and laboratory tests in all men enrolled in the study.

They demonstrated that approximately 87% of men had experienced a positive effect on hair growth.

He numbers break down as follows: 11.1% were classified as greatly increased, 36.5% as moderately increased, and 39.5% as slightly increased.
Were there any surprises in this study? Yes, the investigators found that the response rate improved with increasing duration of treatment. The authors noted that the proportion of greatly increased hair growth was relatively low in patients with hair loss duration of 10 years and more. However, more than 85% of patients with hair loss duration of 15-20 years or more exhibited moderately or slightly increased hair growth. Some well-known medical hair experts have stated that finasteride will not work well in men with long-standing hair loss. Time to re-evaluate those remarks! Keep in mind the difference between long-standing hair loss and advanced male pattern baldness. The former refers to duration and the latter to extent.

This study tells us that finasteride works fairly well across the board. Without going into great detail,

the assessment methods that these authors used were standardized and involved fairly sophisticated statistical analysis performed with SAS software. Efficacy analysis was conducted using several demographic factors including age at first visit, age at onset of hair loss, duration of hair loss, treatment period, and the presence of stress.

Classification Based on Pattern and Degree of Loss

It should be noted that classification by a category of “diffuse hair loss group” was necessary when dealing with an Asian population. The Norwood Hamilton does not fit for the entire Asian population. The response rates among those classified with the Norwood-Hamilton Scale and those classified as diffused hair loss group were relatively the same (i.e., 87.1% and 86.8%), once again consistent with previous studies.
Age at Onset of TherapyWhen the patients’ response rate was calculated for the various age groups, it was fairly consistent, ranging from an 83.6% to 90.5%. response.

The efficacy of this drug proved itself across all age groups. While the original studies on finasteride were conducted in men from 18 to 41 years of age, subsequent studies have confirmed a positive response

to the drug well beyond the age groups indicated by the Propecia® prescription information packet. We should now have confidence in prescribing this drug to men who are considerably older than 41 years of age.
Duration of Hair LossWhen the patients were stratified according to the duration of hair loss, there were no surprising finds. The response rate was relatively even across all groups ranging from a 79.2% response rate for those who had hair loss for less than 1 year to a high of 89.8% for those with 20 years or more of hair loss. The latter merits further discussion. It is felt by many hair restoration surgeons that individuals who have had 20 years or more of hair loss will not respond as well as those who have had hair loss for 5 years or less. Such was not the finding of the study and this should merit a moment of applause.

The discussion section of the paper is well written in their review of previous studies. The authors make the following comments:

Next, from the Department of Dermatology and Plastic Surgery, University “Sapienza” of Rome CASPUR (Inter-University Consortium for Supercomputing) Italy, comes a much needed study to assess efficacy of finasteride in men with androgenic alopecia treated for more than 5 years.
As previously shown, finasteride 1mg was well tolerated and the long-term treatment led to sustained improvement in hair growth in maintenance parameters. Like the Sato study, this study also demonstrated that subjects older than 30 years demonstrated better hair growth on a long term basis. Once again, finasteride efficacy was not reduced over time. This was especially noted in the older group. The following points are worth highlighting:

There is so much good data and findings from the Rossi study that it is difficult to criticize the investigators. However, this Editor Emeritus did have considerable problems with the interpretation of their statistical analysis. Readers may have difficulty discerning the detailed transitional probabilities listed in the tables. Perhaps the more scholarly statistically minded individuals in our Society would care to publish an explanation and interpretation of the tables presented in this article.

Finasteride, much maligned by anecdotal reports in the press and on the Internet, has emerged with a silver lining. It not only works well in all age groups, but it keeps on working. It also improves the quality of life of our patients. Once again we are indebted to all the authors for their important contribution and look forward to hearing more from these groups.

Notes from the Editor Emeritus

This 19 year-old patient filled up our questionnaire and sent some photos by email in August, 2017. His pics suggest aggressive DUPA reason why we recommended finasteride and gave him an appointment one month after. In consultation, we assessed his scalp confirming the diagnosis of aggressive DUPA, made pictures and scheduled periodic controls in order to stabilize his hair-loss. After 6 months we observed a huge improvement in the quality of his hair. And, after a year, full recovery of the coverage, so we decided to continue with medical controls and discard the surgical option.

Although it is not the objective, we know that there are a small percentage of patients with a good response to medication, especially if the prevention is carried out at an early age. The improvement is usually partial, mainly at crown, but we already have seen several cases similar to the one presented. Therefore, that we never are in rush to send a patient to the operation room. We have to be patient and wait to see the effect of medication. If we mix both treatment and start medication at the same time than the procedure can mislead the final outcome and consider a medical result as a surgical treatment, mainly when you see improvement in non-treated areas. 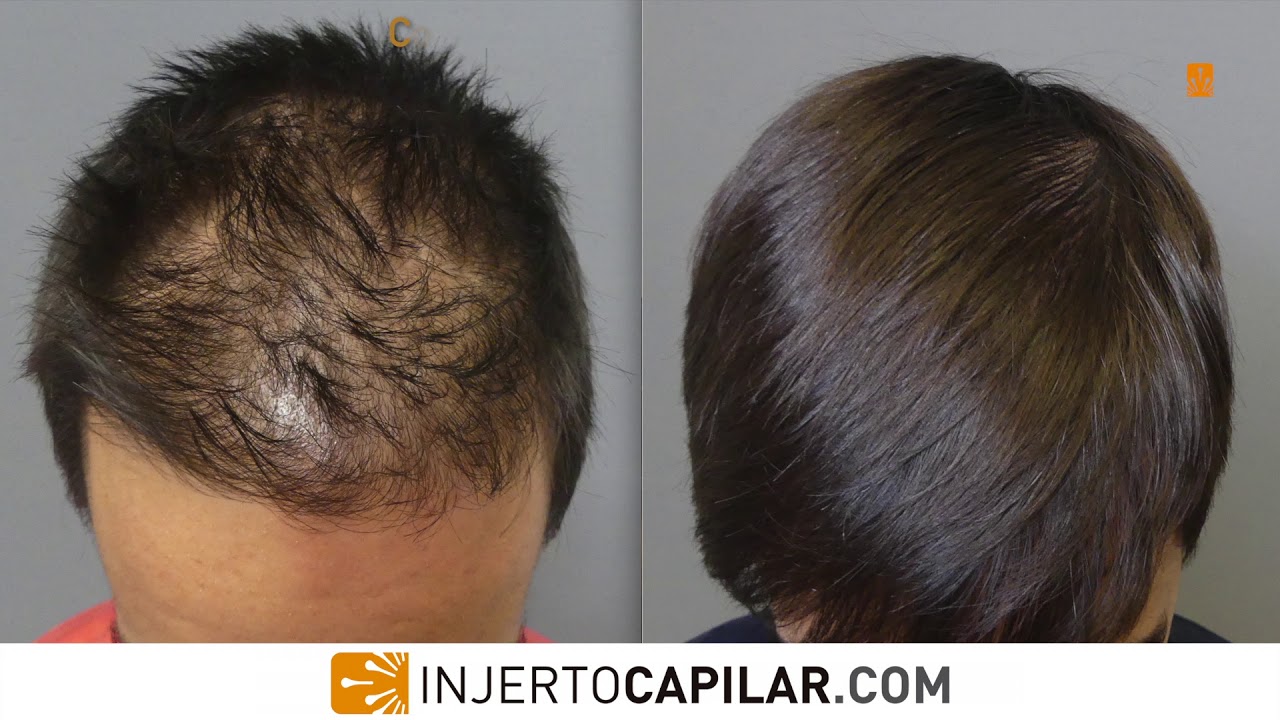